On Sunday 12th of May, at 11 am, Dublin Sketchers have been invited to sketch at 14 Henrietta Street. We will have access to the garden and the kitchen space. As there are tours going, we won't have access to all rooms. Please note that you need to be at the door no later than 11 am if you want to get in, as the Museum's staff will be busy with tours. If you're planning to come, let us know by adding a comment to the blog here, so we have an idea of how many people will be there in advance.

From 2pm, we will sketch around the Capel Street area and meet for drinks at 4pm in Slatterys on Capel Street. A bunch of sketchers will magically appear.

If it’s your first time out and you can’t spot anyone, just choose something to sketch and get stuck in. Keep your eyes open for anyone carrying a sketchbook and say hello. It's a friendly crowd who you’ll get to know over a drink from 4pm. You need to bring your own paper and pens/pencils etc.

Hope to see you there! 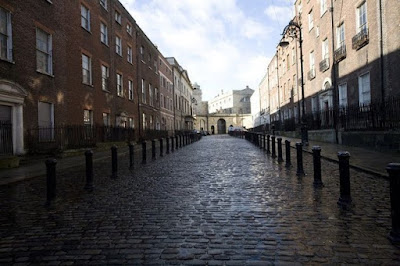 (Almost) Every location in Dublin can be associated with James Joyce's Ulysses, so read on if you're taking part in the ...


From Capel Street, you're only a stone's throw from Little Britain Street, where the scene where Bloom confronts the Citizen and his dog, Garryowen, in Barney Kiernan's, takes place. This is a pub scene, lots of drinks, pints, porter, and with questions of nationality, belonging, otherness, ...

— Could you make a hole in another pint?
— Could a swim duck? says I.
— Same again, Terry, says Joe. Are you sure you won't have anything in the way of liquid refreshment? says he.
— Thank you, no, says Bloom.

If you want a little inspiration, this link will bring you to a short video The Cyclops.

Between April and June, Dublin Sketchers will sketch in some of the places that appear in James Joyce’s Ulysses, which takes place on one day in Dublin in 1904. That day is celebrated every year as Bloomsday, 16th June.

The Olives, Oysters and Oranges sketchbook project will take inspiration from Ulysses,and in particular the references of food in Ulysses. Our work will parallel the exhibition of the same name at the Olivier Cornet Gallery. The title for this project is taken from Flicka Small’s current research into the semiotics of food in Ulysses.
The sketchbooks will be exhibited upstairs at the Olivier Cornet Gallery on 15th and 16th of June, during the Bloomsday Festival. If you don’t want to exhibit your sketches, that is totally fine. Just come out with Dublin Sketchers as usual.


The sketchbooks will be a record of time and place, now and then. They will reveal Ulysses, one drawing at a time.
How do I integrate food into my sketching? How do I link the locations we sketch at and the text from Ulysses? These are a few questions you may have. The answer, of course is entirely up to you. You may be inspired by the text itself of course. The whole universe as we know it exists in Ulysses. You can search through Ulysses online. Or you may be inspired by the locations themselves.  Or let your imagination run wild. Whatever your approach, have fun. Just like Joyce had fun when writing Ulysses.