A cold sunny day at Glasnevin Cemetery on Sunday. Well worth a visit. It's a working cemetery, but also a tourist attraction (the Hop On/Hop Off bus stops there!), with a museum, tours, and the opportunity to walk up to the top of the highest round tower in Ireland (55m), recently re-opened to the public.

Before we started, James read some passages from Ulysses, the Hades chapter, where Bloom and some of his friends go to the funeral of Paddy Dignam. Bloom reflects on death and decay, and the fertilising properties of the dead body!

The first thing that will strike you when you walk through Glasnevin is how vast it is. It is said that there are more Dubliners buried there than there are alive now in the city! But it is also wonderfully peaceful and bucolic, with beautiful trees growing among the graves. There is a gate to the Botanic Gardens, situated next door, and also a gate to the Gravediggers pub, where we met at 4 o'clock for a drink and a chat. 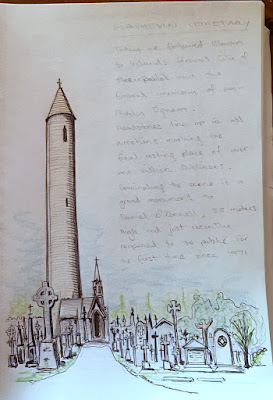 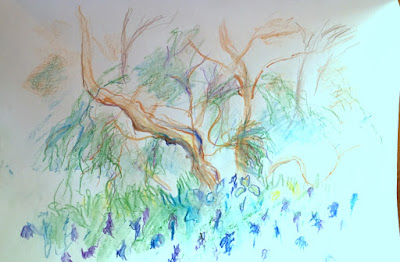 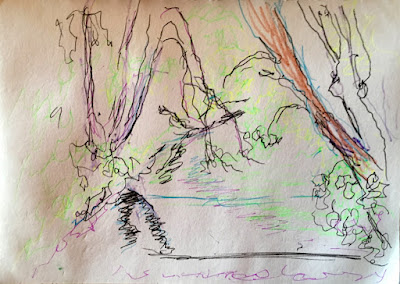 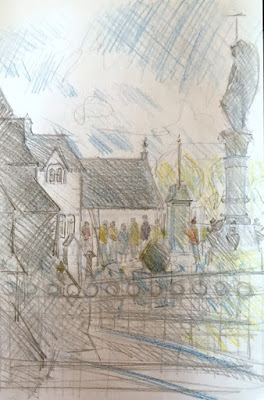 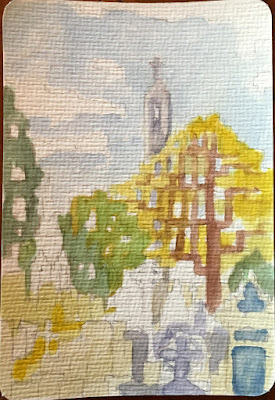 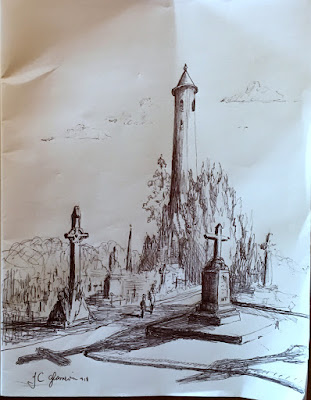 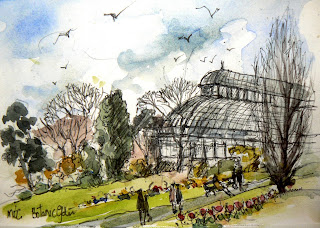 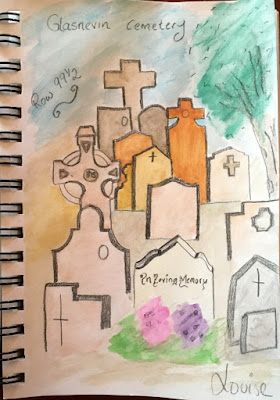 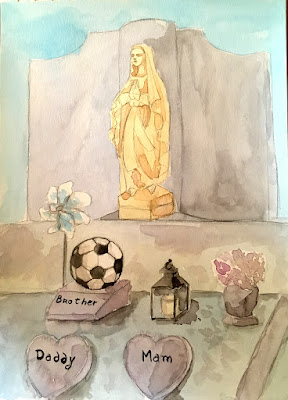 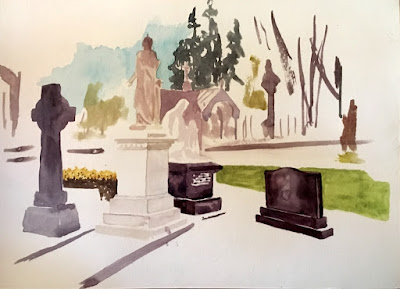 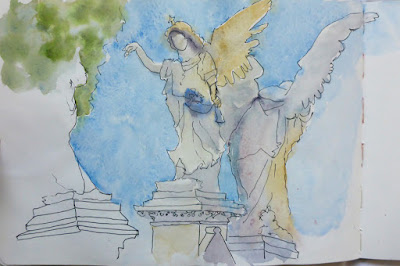 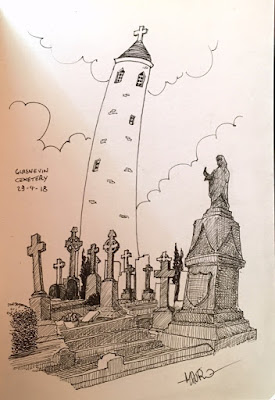 This week we are off to Glasnevin Cemetery - a chance for those who are following our Ulysses trail to catch up with Leopold Bloom as he goes to the funeral of an old friend called Paddy Dignam.

Here's a short video summary of the Hades chapter of Ulysses.

We will meet outside the main entrance at 2pm for a quick intro and reading from Hades.

Please do be aware, for those not familiar with Glasnevin Cemetery, that as well as an historical site, it is still an active cemetery.

Feel free to wander next door to the Botanic gardens also mentioned in Ulysses - this can be accessed by a gate in a side wall - just go to the wall opposite the main entrance and follow the path a bit to the right to find it.

Visitors to Glasnevin Cemetery can now climb the iconic O’Connell Tower for the first time in over 45 years. With it being the tallest round tower in Ireland (55 meters), you get to experience 360 degree panaramic breathtaking views to the north, south, east and west across all of Dublin, Wicklow and the Irish Sea.  if you are interested you can book a ticket here https://www.glasnevinmuseum.ie/_shop/tower.cfm

We will meet at 4pm in the Gravedigger's pub (John Kavanagh's Pub) which you can enter via a gate from the cemetery.
It's at the end wall, just turn right as you enter the main cemetery entrance and continue past the Glasnevin Cemetery Museum and Cafe and you will find a path going down the centre of the cemetery to it.

This week we will be drawing in and around the Powerscourt Town House shopping centre  www.powerscourtcentre.ie/ and the Georges Street Arcade area.
Plenty of street scenes and people passing by outside if the weather is accommodating, if not plenty to draw indoors.

At 4pm we will meet for a drink in the Hairy Lemon pub on Stephen Street Lower, Dublin 2, it's
opposite Break for the Border.
Posted by Dublin Sketchers Group at Saturday, April 21, 2018


Part Three of the Ulysses Sketch Crawl across Dublin, Dublin Sketchers started on Little Britain Street, wove its way down to Grattan (Yes Sex!) Bridge bridging the River Liffey, before wandering over to Merchant's Arch, taking in City Hall, before winding up in Mulligan & Haines pub. We absorbed three chapters from James Joyce's Ulysses - Wandering Rocks, Sirens and Cyclops.

So we went around by the Linenhall barracks and the back of the courthouse talking of one thing or another. Decent fellow Joe when he has it but sure like that he never has it. Jesus, I couldn’t get over that bloody foxy Geraghty, the daylight robber. For trading without a licence, says he.


You must have a certain fascination: Parnell. Arthur Griffith is a squareheaded fellow but he has no go in him for the mob. Or gas about our lovely land. Gammon and spinach. Dublin Bakery Company’s tearoom. Debating societies. That republicanism is the best form of government. That the language question should take precedence of the economic question. Have your daughters inveigling them to your house. Stuff them up with meat and drink. Michaelmas goose. Here’s a good lump of thyme seasoning under the apron for you.

—I know where he’s gone, says Lenehan, cracking his fingers.
—Who? says I.
—Bloom, says he. The courthouse is a blind. He had a few bob on Throwaway and he’s gone to gather in the shekels.
—Is it that whiteeyed kaffir? says the citizen, that never backed a horse in anger in his life?
—That’s where he’s gone, says Lenehan. I met Bantam Lyons going to back that horse only I put him off it and he told me Bloom gave him the tip. Bet you what you like he has a hundred shillings to five on. He’s the only man in Dublin has it. A dark horse.
—He’s a bloody dark horse himself, says Joe.
Above the crossblind of the Ormond hotel, gold by bronze, Miss Kennedy’s head by Miss Douce’s head watched and admired. On Ormond quay Mr Simon Dedalus, steering his way from the greenhouse for the subsheriff’s office, stood still in midstreet and brought his hat low. His Excellency graciously returned Mr Dedalus’ greeting. From Cahill’s corner the reverend Hugh C. Love, M. A., made obeisance unperceived, mindful of lords deputies whose hands benignant had held of yore rich advowsons. On Grattan bridge Lenehan and M’Coy, taking leave of each other, watched the carriages go by.

—But do you know what a nation means? says John Wyse.
—Yes, says Bloom.
—What is it? says John Wyse.
—A nation? says Bloom. A nation is the same people living in the same place.
—By God, then, says Ned, laughing, if that’s so I’m a nation for I’m living in the same place for the past five years.
So of course everyone had the laugh at Bloom and says he, trying to muck out of it:
—Or also living in different places.
—That covers my case, says Joe.
—What is your nation if I may ask? says the citizen.
—Ireland, says Bloom. I was born here. Ireland.
The citizen said nothing only cleared the spit out of his gullet and, gob, he spat a Red bank oyster out of him right in the corner.

They went up the steps and under Merchants’ arch. A darkbacked figure scanned books on the hawker’s cart.
—There he is, Lenehan said.
—Wonder what he’s buying, M’Coy said, glancing behind.
—Leopoldo or the Bloom is on the Rye, Lenehan said.
—He’s dead nuts on sales, M’Coy said. I was with him one day and he bought a book from an old one in Liffey street for two bob. There were fine plates in it worth double the money, the stars and the moon and comets with long tails. Astronomy it was about.
—I’ll take a mélange, Haines said to the waitress.
—Two mélanges, Buck Mulligan said. And bring us some scones and butter and some cakes as well.
When she had gone he said, laughing:
—We call it D.B.C. because they have damn bad cakes. O, but you missed Dedalus on Hamlet.
Haines opened his newbought book.
—I’m sorry, he said. Shakespeare is the happy huntingground of all minds that have lost their balance.
On Grattan bridge Lenehan and M’Coy, taking leave of each other, watched the carriages go by. Passing by Roger Greene’s office and Dollard’s big red printinghouse Gerty MacDowell, carrying the Catesby’s cork lino letters for her father who was laid up, knew by the style it was the lord and lady lieutenant but she couldn’t see what Her Excellency had on because the tram and Spring’s big yellow furniture van had to stop in front of her on account of its being the lord lieutenant.


And what is death, he asked, your mother’s or yours or my own? You saw only your mother die. I see them pop off every day in the Mater and Richmond and cut up into tripes in the dissectingroom. It’s a beastly thing and nothing else. It simply doesn’t matter. You wouldn’t kneel down to pray for your mother on her deathbed when she asked you. Why? Because you have the cursed jesuit strain in you, only it’s injected the wrong way. To me it’s all a mockery and beastly. Her cerebral lobes are not functioning. She calls the doctor sir Peter Teazle and picks buttercups off the quilt. Humour her till it’s over. You crossed her last wish in death and yet you sulk with me because I don’t whinge like some hired mute from Lalouette’s. Absurd!

Before the huge high door of the Irish house of parliament a flock of pigeons flew. Their little frolic after meals. Who will we do it on? I pick the fellow in black. Here goes. Here’s good luck. Must be thrilling from the air. Apjohn, myself and Owen Goldberg up in the trees near Goose green playing the monkeys. Mackerel they called me.


A darkbacked figure under Merchants’ arch scanned books on the hawker’s cart.


They wheeled lower. Looking for grub. Wait.
He threw down among them a crumpled paper ball. Elijah thirtytwo feet per sec is com. Not a bit. The ball bobbed unheeded on the wake of swells, floated under by the bridgepiers. Not such damn fools. Also the day I threw that stale cake out of the Erin’s King picked it up in the wake fifty yards astern. Live by their wits. They wheeled, flapping.
That is how poets write, the similar sounds. But then Shakespeare has no rhymes: blank verse. The flow of the language it is. The thoughts. Solemn.

North wall and sir John Rogerson’s quay, with hulls and anchorchains, sailing westward, sailed by a skiff, a crumpled throwaway, rocked on the ferrywash, Elijah is coming.


Put us all into it.

in 2018, Dublin Sketchers will get down and dirty with James Joyce. We’ll sketch in some of the places that appear in his big book Ulysses – a 700 page crazy epic that takes place on one day in Dublin in 1904. That day is celebrated every year as Bloomsday, 16th June.

The Drawing on Joyce sketchbook project will take inspiration from Ulysses – the stories, the characters, the rumour and humour. We’ll sketch pubs, chemists and cafés. Parks, martello towers and cemeteries. The sketchbooks will be a record of time and place, now and then. They will reveal Ulysses, one drawing at a time.

The sketch books will be exhibited during the Bloomsday Festival. If you don’t want to exhibit your sketches, that is totally fine. Just come out with Dublin Sketchers as usual.
You can follow the development of the project on the website, and Twitter @DublinSketchers and @DrawingonJoyce.

If you can’t join the sketch crawls in Dublin, then tweet your related sketch during the week of the sketch out. Future project dates - Sun 15th April at the National Print Museum for the Aeolus chapter, Sunday 13th May around Westland Row for the Lotus Eater chapter and Sunday 10th June between Eccles Street and North Great George's Street for Calypso, Ithaca and Penelope.