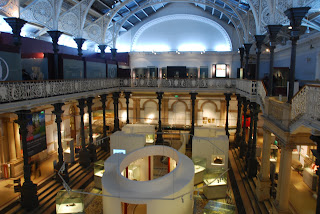 On Sunday 11th September, Dublin Sketchers will sketch at the National Museum of Archeology located on Kildare Street from 2pm and meet for drinks at 4pm at the Starbucks nearby (Stephen Court, GF1, St Stephen's Green, Dublin 2, D02 N960).

From Prehistoric Ireland to Ancient Egypt, the museum gathers important archaeological artefacts dating from 7000 BC up to the 20th century. The collection includes beautiful Celtic and Viking objects. Opened on 29 August 1890, the building was designed by Thomas Newenham Deane and his son, Thomas Manly Deane, in the Victorian Palladian style. The columns around the entrance and the domed rotunda are made from Irish marble and bear influence from both 18th century neoclassical design and the Pantheon in Rome. The stone on the exterior is mostly Leinster granite, with the columns formed from sandstone excavated at Mountcharles, County Donegal.

If it’s your first time out and you can’t spot anyone at 2pm, just choose something to sketch and get stuck in. Keep your eyes open for anyone carrying a sketchbook and say hello. It's a friendly crowd who you’ll get to know over a drink from 4pm. Don't worry if you're late, most of us usually are! You need to bring your own paper and pens/pencils etc.

If you would like your sketch to be added to the website, email it to dublinsketchers@gmail.com or post it to the Dublin Sketchers Social WhatsApp group if you are on that. Please edit your image so that it is low res and properly oriented for posting to the website.

Hope to see you there!