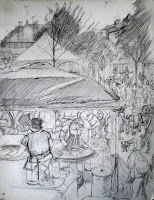 This meetup was attended by four of us Ciaran,Carey and new member Brenda. Some people worked by the sea front and at the peoples park and to be honest it was all fairly hopping, Dun Laoghaire was full of people, noise, colour, smells, rastas with big wooly hats, africans with fantasticly colourful costumes, yiddish bands, the gardai etc. and of course I forgot my bloomin' camera which I am really regretting since. I did one scene in the peoples park and then one in a cafe after shown here. Unfortunately as I forgot the camera there isn't a pic of anyone elses work - I promise that the next time I attend I'll bring a camera to take a record of the work.